A couple of weekends ago I went on a city break to Berlin with a female friend and without my husband or children. I have not been away by myself for years and it was a real treat. We spent most of the time eating, drinking and wandering aimlessly around the city.

We ate at the trendy, vegetarian, Michelin starred Cookies Cream, had a leisurely, retro brunch in the leafy Prenzlauerberg District and drank mind-blowingly strong coffee at uber-cool The Barn. However it was the Berlin beef balls, bought from a small stall in Markthalle Neun, in the Kreuzberg District that was my fondest food memory.

Once home, I decided to copy the idea – helped by the promo card which kindly indicated the ingredients in each type of ball. I just needed a little help from google translate. 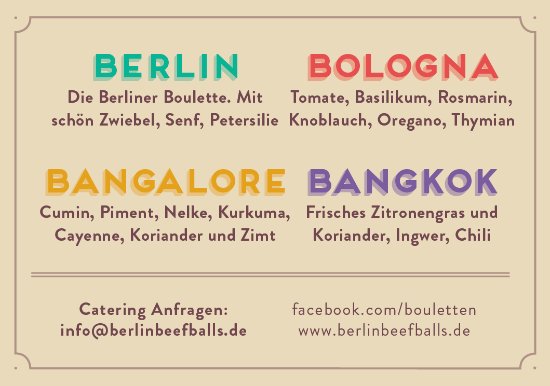 They were fun (albeit time consuming) to make. Once cooked they all looked pretty much the same on the outside so we played an exciting game of meatball roulette at dinner which my son absolutely loved. His favourite were the ‘Bangkok’ but I suspect that’s because he enjoyed saying the ‘kok‘ part exaggeratedly in an attempt to be rude (he is 8 and that is the level of his humour).

In the market hall they were rather more orderly, putting four balls of each kind on a skewer and serving with thin slices of dense brown bread and lashings of butter.

Take 1kg of good quality beef mince and divide into four portions of 250g each.

Add the ingredients to each portion according to the lists below.

Mix all the ingredients together well with your hands and roll into 10 small meatballs. I find that dampening  your hands first with a little water helps to stop the mixture sticking to them.

Heat a tiny amount of oil in a frying pan and cook the meatballs over a medium heat until they are a dark brown colour. Take your time here to make sure that they are browned well all over. The process will take around 10-15 minutes.

You will need two frying pans for this amount, or you can keep one batch warm in a low oven while you cook the rest.

The joy of a lunchtime beer and no responsibilities!